We had a slow start to our morning at Don & Cathy’s, but what a treat for D’Arcy and me to have someone preparing breakfast for us for a change! Cathy (with Olivia’s help) made the most decadent raised cinnamon rolls with a carmel sauce. Definitely a future menu offering at our B&B! We got showered and changed and re-arranged our suitcases to be ready for our flights.  The kids played Uno and chatted with Cathy while we got ready. Their house is beautifully decorated for Christmas, and it made me realize that I do miss having our own decorations up this year.

Olivia & Cathy preparing the cinnamon rolls to be ready to bake the following morning.

We had to leave late morning because I had ordered some lobsters to take to Phil & Susan’s with us and they had to be picked up in Boston at lunchtime. Funny story – when I had called to order the lobsters locally from Nova Scotia and have them shipped, they informed me that when they ship lobsters to the US, they use a company from Boston. I guess they’re coming from the same cold waters of the Atlantic Ocean, and I’m sure the lobsters don’t know where the border is! 😉

After we picked up the lobsters, packed for airplane travel, we visited some of downtown Boston. We stopped in at the Hard Rock Café and split some appetizers. We told the kids the story of our honeymoon in San Antonio at Christmastime, when we ate our Christmas Dinner of nachos at the Hard Rock Café along the Riverwalk. It was fun and a nice change of pace to do something spontaniously. D’Arcy & Olivia were having a dance-off by the time we left.

Daddy & Sarah having fun at the Hard Rock Cafe in Boston.

We swung by to see the Boston Christmas tree, an annual gift from Nova Scotians to remember and thank the people of Boston for all the help they provided after the Halifax Explosion in 1916. We were surprised by how huge it was; just beautiful!

We stopped at the grocery store to get food for the cooler to take on the plane and use at the airports with Olivia. We bought some clementines, ham, grapes, apples, pineapple, crackers, and cereal to pack. She has a note from her allergist, which states that she is not able to eat airline food due to her allergies.  From there, we went to our friends’, Willem & Kate, house in Salem to spend the evening.

Good friends, good food, and laughter; what the holidays are all about 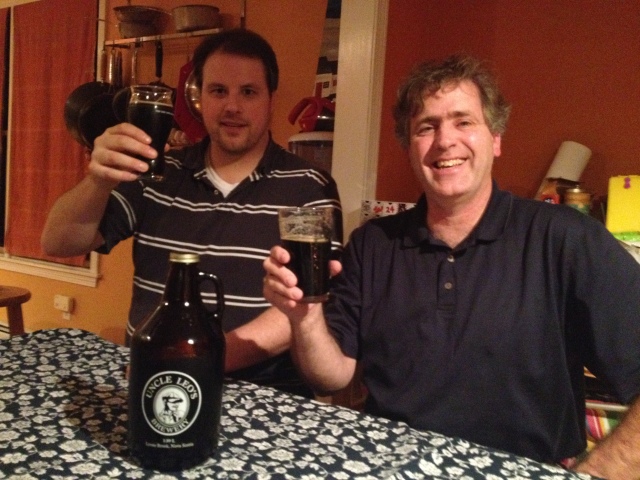 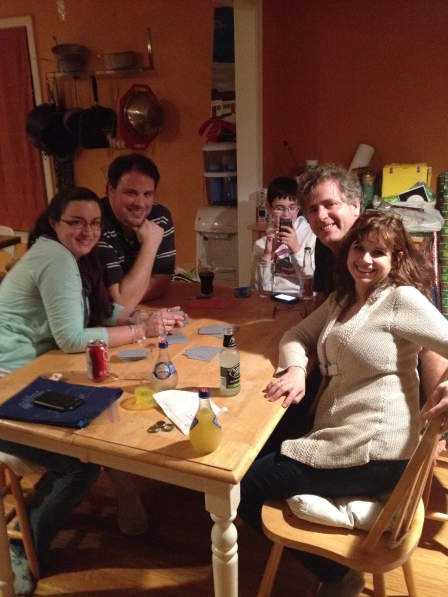 We’ve been friends for ten years now and our two families get along very well.  We got caught up  over a huge spread of appetizers while the kids all hung out together, then we had a delicious pasta supper with salad and bread. After supper, the grownups played a new card game while the kids played games, built with lego, played wii, and hung out. We had chocolate fondue for dessert and enjoyed ourselves until midnight when it was time for us to leave for the airport, a 20 minute drive from their home.

We rearranged the things in our bags one last time, in order to pare our luggage down to as little as possible. United Charges $25 per bag, so we hoped to just check the lobsters, the booster seats for the girls, and one large suitcase. We took a shuttle to the terminal, to discover that there was nobody around. (At 1am – go figure!) We got ourselves set up on chairs by the baggage claim and had catnaps until 3am when we could check in for our flight. By that time, the lineup was huge. We had some stress trying to get checked in when our boarding passes didn’t print at the self-serve kiosk. How frustrating! We were able to get them sorted out and rushed to security where they put us to the front of the line since our flight was scheduled to depart at 5:00am. You can just imagine the chaos and stress I was feeling as we got carry-ons, medications, electronics, food, and personal items sorted out while struggling to get shoes and belts off.  We got called aside and they informed me they were going to go through the cooler, and did it have any sharp items? I replied that no, it didn’t, and she pulled out a jar of pickles I didn’t realize was packed – liquid! Needless to say, I gave the pickles up and we rushed to our gate, only to learn that they were waiting for a flight attendant so our flight was delayed. We only had one hour to make our connection in Boston, so we were a little bit worried, wondering what we would end up having to do.

It was the first time the girls had ever been on an airplane and they were a combination of worried and excited. It was fun to watch them as we prepared for take-off and got up into the air! Our two hour and 37 minute flight was uneventful and we all dozed. We were sure we were going to have missed our connection, but the pilot came on the speaker and said that of the 162 people on board, 150 had to catch a connecting flight. He suggested that those who weren’t trying to immediately catch a flight, that they let those of us who did have to catch one off first. As soon as I turned airplane mode off on my phone, I received an email saying that the connecting flight had been delayed by 13 minutes and we learned we had hope to make it. If we didn’t, United had booked us on a flight in the afternoon of Christmas Eve and we wouldn’t be getting to Portland until 11:30 p.m. on Christmas Eve – we would have been flying with Santa and the reindeer! Luckily, they held the flight for us in Chicago and we sprinted from one plane to the other. We took off just after we got to our seats.

The kids are really good travelers and haven’t complained, despite being exhausted.

Not getting much out of her first flight…

At this point, we’re excited to see Phil & Susan, but ready for a hot shower and a good nap! When we arrive at close to 11am Portland time we’ll have been traveling for 15 hours in this leg of our journey. We’re hoping that our lobsters and car seats made their connection as well and that we’ll be able to relax a bit and enjoy Christmas when we arrive in Portland. Is that word even in our vocabulary?