Although Family Literacy Day is on Tuesday, January the 27th each year, we celebrated early. D’Arcy is scheduled to have surgery this year on the 27th and when Sarah heard, her first comment was, “Oh NO! He’ll miss Family Literacy Day!” We have been celebrating annually since 2007, the year Olivia was a baby. Each year we have a slightly different format, depending on what is going on at the time. We’ve celebrated at lunch, at dinner, on the weekend, on a week-night, at our house, or at my parents’ house. The constants are that we all attend along with my parents, share books/magazines/newspapers, stories, and food. Sometimes the books we receive are new, sometimes, they are new-to-us, and there have even been years when books were borrowed from the library.

Family Literacy Day has become an event as special and highly-anticipated as Thanksgiving, Christmas, and Easter at our house!

This year, we combined our Family Literacy Day celebration with a celebration of Auntie Ruth’s 86th birthday, and included Mirelle, our guest from Brazil. As the children have gotten older, the day has evolved to include questions that you must answer before receiving your book. “What are your earliest memories of visiting the library?” (My first visit was to story-time at six days old, but I don’t have a memory of that! 😉 ) “Where is your favourite place to read?” “What was your favourite book as a child?”

We had many laughs as we ate munchies, then assembled sandwiches from a recipe. We celebrated Auntie Ruth’s birthday with “Mud Pie” and discussions about technology.

Mirelle’s new book about Nova Scotia. She can take it back to Brazil to show her friends and family.

Auntie Ruth answers her question before opening her book. 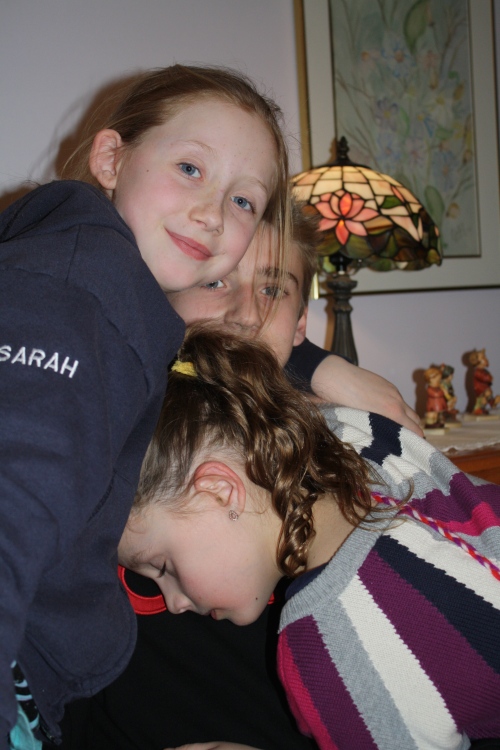 Some sister-love for Evan. “What’s the most awesome thing to ever happen to you?” “My siblings.” ❤ 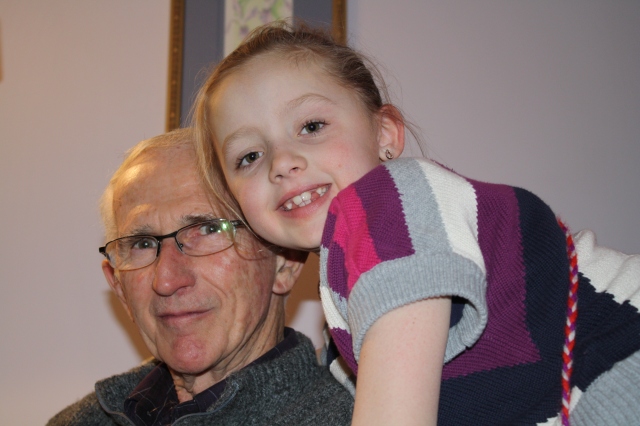 D’Arcy reads his book while Alex answers his question, “Is there a book that you’d like to, or feel you should read?”

Sarah answers her question, “What was the best thing to ever happen to you?” 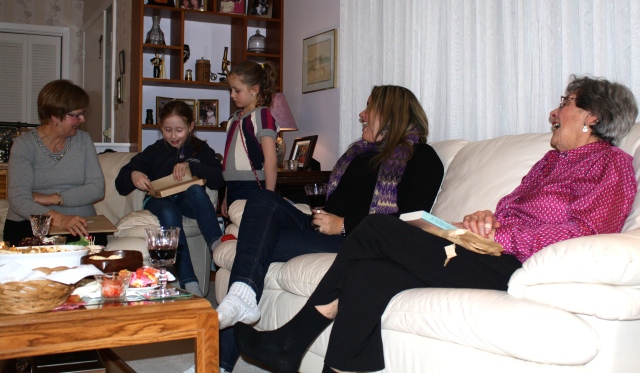 Sarah took forever to open her book of trivia.

Some time to enjoy our books between courses. 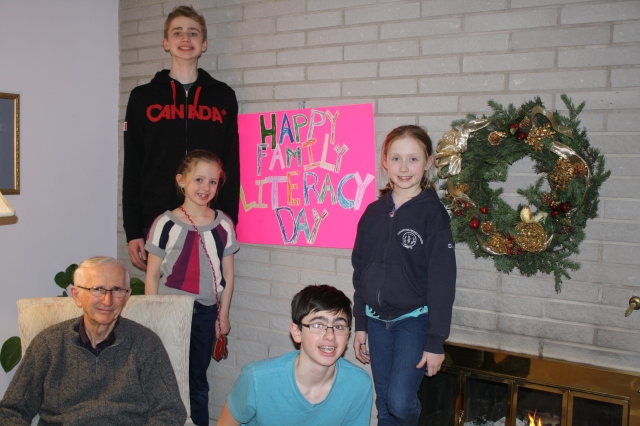 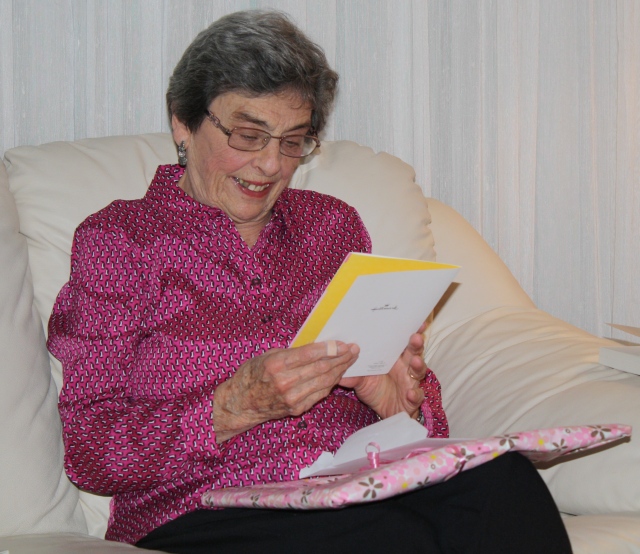 Evan drove us home, much later than we had intended, and way past bedtime. However, nobody wanted the evening to end.

For me, I’ll be reading my book, “The Blue Tattoo” by Steven Laffoley, a novel about the Halifax Explosion, on the actual date of Family Literacy Day while D’Arcy is in surgery. I’ll be happy to have a story to occupy my thoughts and help me pass the time. He’ll be happy, I’m sure, to have some new books to read during his recovery.

We’d love to know about other people’s Family Literacy Day traditions. Please tell us in the comments!

Inviting strangers into our home each day, we have to be aware to remain neutral on some topics. Have you ever heard the adage, “don’t discuss politics, religion, or sex” with strangers? We try to live by that. We’re usually pretty good at avoiding these topics, although honestly? One of the most interesting breakfast conversations that’s ever taken place in our ten years of business was at breakfast in the summer of 2008 during the US election before Barak Obama was first elected. We had three couples staying with us and they all had breakfast at the same time. One couple were democrats from the East Coast of the US, one couple were republicans from the Southern US, and the third couple included a  Canadian doctor who had worked in both Canada and the US. Luckily, they were all very respectful of one another, and had some rich discussion.

Although this post’s reason for being has to do with religion, it is really about celebrating family, life, and traditions. I was at a teaching conference last week and the theme was “unity”.  In two days, the line  which resonated with me the most came from keynote speaker, Barry Lewis Greene. “To find unity, we need to celebrate our diversity.” (Paraphrased)

We are bringing our children up in two different churches with very different beliefs. Catholic vs. United Church of Canada. Confusing? Maybe. The “rules” of the two can’t get much further apart. However, we believe the church is the community we build around us; not a particular building, and not the particular “rules” which come from belonging to a certain faith. Both churches teach people to be kind to one another, and do what you can for others. That is how we try to live our lives everyday.

We celebrate diversity – even within our own family.

Yesterday, our daughter Sarah and her cousin Neil celebrated their First Communion at the Catholic Church. It was a special day for them – especially because they got to participate in the process together – and we were pleased to host all three sets of grandparents and both sets of godparents here for lunch afterward. When our boys had their first communion, it took place on a Saturday night and they were able to choose what they wanted us to serve for dinner. Alex chose ribs for his, and Evan (at the age of eight) chose bacon-wrapped beef tenderloin stuffed with scallops! 🙂

It was a perfect afternoon. You’d never have known there were eleven kids in the house and outside, they all played nicely together with hardly a peep. The weather cooperated and temperature was just perfect. We had guests drop-in before we had finished the clean-up, but they didn’t seem to mind. After everyone left, we took advantage of the summery weather to run through the sprinkler, and enjoy the boys’ year-end band concert.

It’s all about diversity.

Some photos from our special family day:

Our beautiful Sarah, wearing a dress handed down from her cousin Erin, and the headpiece I wore at our wedding dance.

Sarah with her godparents, Martha & Stephane. Trivia – Martha grew up in this home. We bought the house from her mother in 2002 and created our B&B.

Sarah with her proud parents. 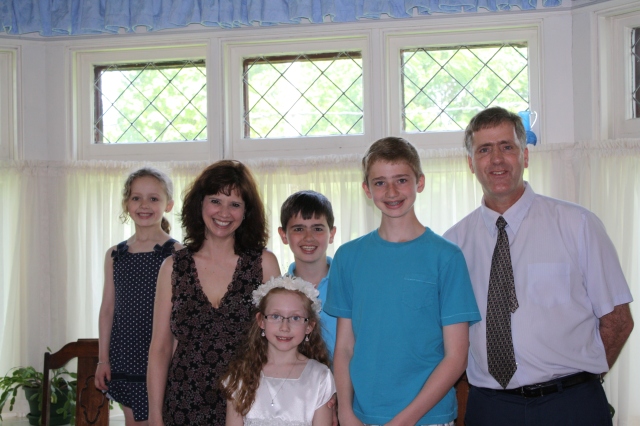 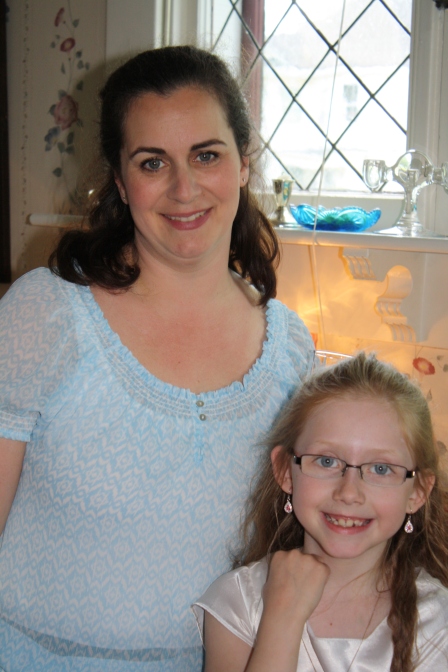 Sarah and her godmother, Martha. (A much better photo of Martha!) 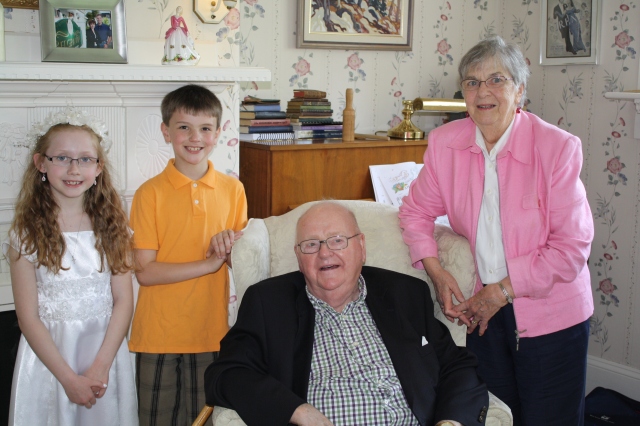 Sarah and Neil with Grandma and Grandpa McDonah

Sarah with both sets of her grandparents – how lucky is she?!