I am officially on an adventure!  This winter, I became aware of a professional development opportunity, sponsored through the Tourism Industry Association of Nova Scotia (TIANS) and the Atlantic Canada Opportunities Agency to attend the Professional Development Program at Cornell University.  As a university student studying Tourism & Hospitality Management, I used to pour over the journals from the Cornell School of Hotel Management.  I doubt I ever passed in a paper without at least one reference to those journals.

I knew I had to apply!

I was accepted to take the first course towards a Certification in Strategic Hospitality Management.

The past few days, I have been scrambling to get ready for the trip.  It’s a busy time of year to start with; D’Arcy’s been marking exams and coming up with final assessments, the kids have all had their year end activities and the B&B has been in full swing!  D’Arcy was up all night last night so that he could get his marks submitted and bake bread (our end-of-the-year teachers’ gift).  When I came downstairs this morning at 5:50, the table was set, the muffins were made and there were eight loaves of bread on the counter and four in the oven!

Oatmeal Brown Bread for the teachers!

This morning, as I served breakfast, I mentioned to the guests that I was excited because I would be leaving late morning to fly to Ithaca, New York.  We had a West Coast crew this morning – British Columbia & Washington State.

As president of the school parent-teacher group, as soon as our guests left I scooted out and, with my sister-in-law, took two trays of fruit and six dozen muffins up to the school for the teachers to show our appreciation for all they do.  I came back home and helped my father finish the kitchen clean-up.  Before we knew it, it was time to hit the road for the airport!

I had received an email that my flight was delayed by and hour, but my father was anxious to get me to the airport!  (Keep in mind that this is the same man who tried to get me to my wedding a half hour early!)  My flight was delayed, so I dropped some of our Belgravia Bed & Breakfast brochures off at the airport Visitor Information Centre.  As I was talking with Natalie, we discovered that her cousin is my teaching mentor at the Nova Scotia Community College!  It’s a small world!

I went upstairs to US departures and breezed through security.  I went on to be cleared through US Customs and got pulled aside!  At first I thought it was because the purpose of my trip was to study and they thought I needed a certain Visa.  I got taken into a secondary area and asked to sit in  a sterile environment while I waited for the Customs Agent to look up all the information.  It turned out I was screened because the name on my passport is not the name on my birth certificate!  I’ve never heard of this!  He told me all my information is incorrect and that I can’ t just “change my name”!  Talk about stress.  Luckily, I had other ID with me and so pulled out my driver’s license and my Nova Scotia health card which have my name on them, exactly as written on my passport.  He allowed me to go through but told me when I get my passport renewed, I should get them to change my name.  Actually, I will be applying for a NEXUS card instead to be pre-cleared and avoid the opportunity of something like this happening again! 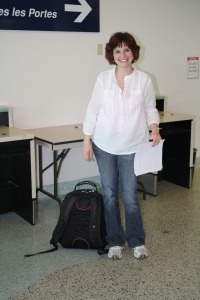 Through security but before going through US Customs!

I went into the holding area which was really quite lovely.  It is bright and airy and clean.  I had a burger and watched the planes, then did some homework.  Our daughter has a severe Peanut/treenut allergy, so we never eat nuts of any kind when we are around her; since I will be away for a week, I had my first Crispy Crunch chocolate bar in over four years!  Yum!! The Halifax Stanfield International Airport has been voted best airport in its class for the past seven years, and after traveling through three airports in one day, I understand why!  It was a very pleasant experience.

My flight finally took off from Halifax to Philadelphia and I figured that when I landed I would have about 20 minutes to switch terminals and make my connecting flight to Ithaca.  As it turned out, I needn’t have worried as when I arrived, I discovered the flight to Ithaca had been delayed by an hour-and-half.  My friend Kate, who grew up in Upstate New York, but now lives in Boston, has met me for the weekend, so we spent our time in the airport getting caught up after I called the owner of the B&B where we were booked to let her know what was going on.  When we boarded the plane to Ithaca, we were told that due to severe weather earlier in the day, there was a backlog for take-off and we were behind approximately 22 other flights.  We ended up sitting on the runway for an 1hour and 45 minutes before take off, so it was close to 9:00 when we finally arrived in Ithaca.  Luckily, our bags came right through and the rental car was waiting for us.

We drove to Thomas Farm B&B and brought our things in.  We have a sweet room with a loft, so freshened up a bit and then headed back into downtown Ithaca to find something to eat.  Along the side of the road, Kate pointed out the fireflies – the sky was just full of them and it was just beautiful.  We also had a possum run across the road in front of us which was another new experience!

Most of the nicer eating establishments were closed and we decided that we weren’t quite up to going to one of the College pubs, so we went to “Collegetown Pizza” and had a slice of pizza and wrote our names on the wall with many others!  We came back to the B&B where we poured over the tourist literature of the Finger Lakes area and made a plan for Saturday before calling it a night. 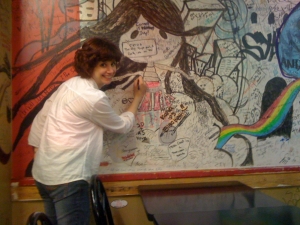 My name is there for posterity

D’Arcy is home looking after a full-house by himself.  We had some returning guests arriving who I am disappointed to be missing…

Next up:  Exploring the Finger Lake Region of New York State!